Why Irish savers should forget about banks

As RaboBank gears up to exit the Irish market in May, its 90,000 customers will now have to seek out savings and deposit accounts elsewhere. But financial advisers will caution that putting your money on deposit is never going to be the most attractive option if making that money grow substantially is your prime aim.

Interest rates running below the already low rate of euro-zone inflation mean Irish savers, for the most part, would be better placed seeking out alternatives to simply ploughing funds into a savings account on a monthly basis.

However, there are some advantages to savings accounts. If you have a savings goal in mind, for example, banks have made it relatively easy to help you track your path to achieving that goal. 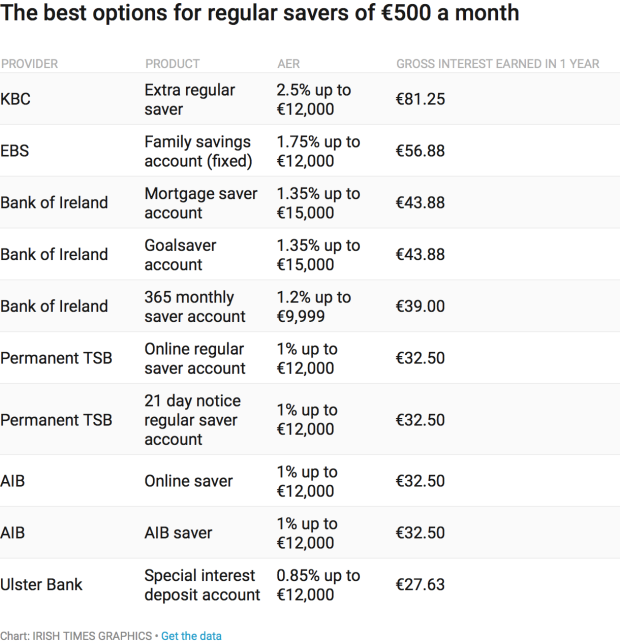 And savings are quite a secure way of putting money aside while ensuring that the funds are easy to access if and when they’re needed. This contrasts materially with exchange-traded funds or stocks, where you might not want to sell when the rainy day comes or money is quickly required.

In the past, advising people to put money on deposit was a reasonable option because interest rates were relatively high, financial adviser Frank D’Arcy notes. The founder of Personal Advisory Service says it is a sign of how dramatically things have changed.

“The problem today, if you put your money in a deposit account, is that you’re not doing it for the purpose of getting a return because the return is zilch,” he says.

“If somebody is looking at a time horizon of two to three years then there are other options, subject to their understanding of risk, that are likely to generate a higher return.”

Of course, some options will be limited to individuals who have a significant cash pile to begin with. D’Arcy instanced one fund targeted to shorter-term investors with an investment horizon of one year offering an attractive return but with a minimum investment amount of €125,000.

Why have rates dropped so much?

Deposit interest rates offered by Irish banks have been on the wane for a number of years, as interest rates across the euro zone tumbled. The arrival of negative interest rates at the European Central Bank in 2014 only exacerbated that trend.

Since then, interest rates on deposit accounts for lenders have remained negative, offering a return of -0.4 per cent. That compares with June 2007 when the rate was 3 per cent. Effectively, that means that if banks were to put their own money on deposit with the ECB, they’d lose money, thus reducing the incentive to offer high interest rates to consumers.

“Even though we’re 10 years on [from the financial crisis], risk appetite hasn’t come back to the extent you might think,” says Dermot O’Leary, chief economist with Goodbody.

“We’re still in the zero interest rate world. There’s talk of us moving out of it but we’re still at the very start of it,” he said, adding that positive rates are unlikely to return until the “start of the next decade”. O’Leary does, however, see ECB rates improving, albeit still in negative territory, from the middle of 2019.

For Irish lump-sum savers the options are distinctly unappealing

Aside from the effect the ECB has on interest rates, O’Leary also flagged the fact that previously there used to be competition for deposits in banks as they sought to grow their loan book. That isn’t the case any more as their loans match their deposits. While that could change, O’Leary notes that it will be a slow process.

This year will be the first year in the last nine that Ireland is expecting to see loan growth following the period of deleveraging. In the short term, he says, banks are well funded to deal with that loan growth.

Although savings accounts are easy to access and relatively straightforward when they’re set up, they present a constellation of options. The range of savings accounts can sometimes make choices for household savings seem complex. AIB alone has 11 different options while Bank of Ireland has 19, depending on what stage of life you’re at.

KBC Bank Ireland currently offers the most competitive rate for regular savers – where an amount is invested each month – with a 2.5 per cent variable annual equivalent rate (AER). The account, called “extra regular saver”, allows people save up to €12,000 per year. EBS offers the second-best rate of 1.75 per cent on a family savings account and, again, that allows savings of up to €12,000 a year.

Those two accounts are the only ones that beat the current rate of inflation in the broader euro zone. While no bank is offering negative rates, the rest all fall below the inflation figure.

Bank of Ireland’s best offer for regular savers has a 1.35 per cent variable AER. The account, called “mortgage saver”, allows people to save up to €14,999 at that rate. Anything above that attracts a much lower rate of 0.25 per cent.

AIB’s most attractive option is a regular saver account in which you can save up to €1,000 a month. That account, which is also open to online savers, attracts a variable AER of 1 per cent. Amounts above the monthly threshold attracts the paltry rate of 0.01 per cent.

Under Bank of Ireland’s best option, if you were to save €5,000 a year you’d achieve gross interest of €67.50. However, deposit interest retention tax (Dirt) of 41 per cent payable on that would mean your net interest would amount to €39.82.

In AIB’s case, if you saved the same amount over 12 months, you’d earn gross interest of €50 and, after Dirt, you’d be left with €29.50. Considering euro-zone inflation in March was 1.4 per cent, both of the above options mean you’d really be better off considering alternatives.

It’s similar in the case of Permanent TSB. Regular online savers can achieve a variable AER of 1 per cent up to €12,000. The 21-day notice account offers an AER of 1 per cent. With that account, however, the amount you can save is more generous – at up to €50,000.

Are there better options for lump-sum savers?

For lump-sum savers the options are distinctly unappealing. If you’re looking for an instant access account, KBC again offers the best rate but it is just 0.3 per cent AER. No other bank offers anything higher than 0.05 per cent AER with the worst rate on the market being offered by Bank of Ireland at 0 per cent. The others aren’t much better.

The situation improves ever so slightly if you’re happy to forgo instant access and accept savings over a fixed term. If that term is anything under three years, however, the rates are paltry.

For lump-sum savers there are alternative options. Credit unions are in the savings business and while they usually pay a yearly dividend rather than interest on your savings, building up a pot with your local branch makes accessing cash when you’re subsequently looking for a loan much more straightforward. The level of dividend available depends on the credit union’s profitability. And you’ll still have to pay Dirt on your dividends.

Given the current low-interest-rate environment – and the punitive level of Dirt – it’s well worth looking at what is on offer with An Post State savings. A major attraction of most of An Post’s offerings is that they are tax free. The interest you get falls straight through to the bottom line.

Of course, that has raised the hackles of the commercial banks and, having come under some pressure, the rates on offer on State savings have fallen in recent years.

In terms of interest rates, the most attractive lump-sum offer, if you are prepared to leave your money invested over the long term, is the 10-year National Solidarity Bond. It will pay 16 per cent tax free over the term – which equates to 1.5 per cent AER. Given that Dirt is not an issue, an equivalent bank account would need to be offering above 2.5 per cent to compete.

The shorter-term four-year National Solidarity Bond is not a market leader, offering just 2 per cent over the period – or 0.5 per cent AER. The better bank offerings will top this even after stripping out Dirt.

The traditional savings certificates take five and a half years to mature but they do offer an AER of 0.98 per cent tax free – appreciably more than banks are offering on lump sums.

If you are planning on saving over €100,000, you will need to be conscious of the need to spread your risk

A childcare-plus account into which you pay for one year and then leave the money untouched for a further five years offers the same 0.98 per cent AER tax free.

But savings bonds – a three-year tax-free product – offers an AER of just 0.33 per cent right now.

If you are planning on saving more than €100,000, two issues arise. First, most financial advisers will tell you that ordinary bank deposit accounts are not the best vehicle for that sort of sum.

Secondly, you will need to be conscious of the need to spread your risk.

The Government’s deposit guarantee scheme protects depositors in the event a bank, building society or credit union is unable to repay their money. As long as the institution is authorised by the Central Bank of Ireland, deposits are covered – but only up to €100,000.

So if a bank was to go belly up in the morning and you had more than €100,000 saved up, you’d lose the remainder. Remember that the guarantee pays per person per institution, so if you’re spread across a number of banks or, in joint names, your money will be safe.

Important tip before you start saving

If you’re at the beginning of your savings journey, the Competition and Consumer Protection Commission offers one key piece of advice. Before you look at putting money into low-interest savings accounts, you are better advised to use the money to pay something extra off your outstanding loans or clearing the balance on your credit cards.

The rationale is that the interest banks are charging on your borrowings – especially credit-card balances – will inevitably be higher than the amount they are offering you to save your money with them. By paying off your overdraft or accelerating payments on a loan, you are effectively “saving” the money you would otherwise have to pay in additional interest charges.

by Peter Hamilton, The Irish Times