Trans groups under fire for huge rise in child referrals 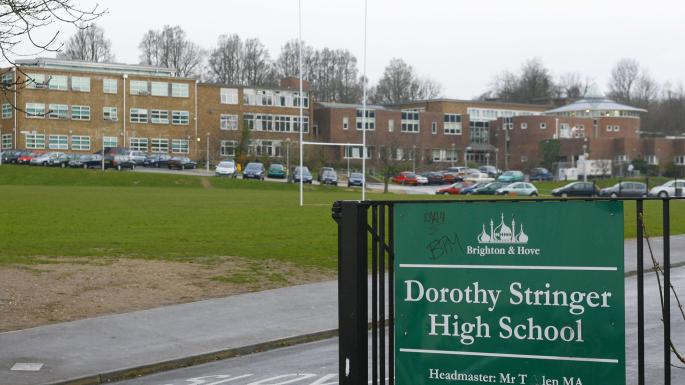 Dorothy Stringer School in Brighton has 40 pupils who ‘do not identify as [the] gender presented at birth’
CHRIS ISON/PA WIRE.

At Dorothy Stringer School in Brighton, the wind of gender change is blowing hard. Hailed by Tatler magazine as the coolest state secondary in town, with a “liberal vibe” to fit its progressive catchment area, Dorothy Stringer is at the forefront of something very cool indeed.

According to the school’s “equality information report” this spring, no fewer than 40 pupils — children aged between 11 and 16 — “do not identify as [the] gender presented at birth”. A further 36 are gender-fluid, not identifying with their birth gender “all the time”.

The head teacher, Richard Bradford, said the figures, the highest yet revealed in any school in the country, were from a survey of his students by the local council. The number of “openly trans children” who had “approached us with their families to say that they are transgender [was] much lower”, he said.

Even allowing for a certain number of teenagers messing around with the survey-takers, something important is happening, both in Brighton and in Britain. Over the past five years, the number of children referred to the NHS’s specialist service for those seeking to change their gender has risen by 700%.

When they turn 16 or 18, some will make life-changing alterations to their bodies, cutting off breasts or taking hormones such as testosterone that affect their fertility. What are the long-term effects? Will they regret it? No one knows, because the change has been so fast. “In no other field with such effects has treatment got so far ahead of research,” said Michele Moore, of the Patient Safety Academy at Oxford University.

To trans activist groups that focus on young people, such as Mermaids and Gendered Intelligence, this is a flowering of public awareness and acceptance that has lifted people’s fear of revealing their innate gender identities.

Others say this cannot be the whole reason. “If that’s the case, where are the adults, the middle-aged people seeking transition?” said Jane Galloway, a parent and women’s rights campaigner. Over the same five-year period there has been a rise in the number of adults referred for gender treatment of 240% — big, but lower than for children.

Part of the explanation, say some professionals, is the activist groups themselves. Helped by funding from the public sector, the national lottery and the BBC’s Children in Need, they have undergone their own transition, from marginalised outsiders to darlings of the Establishment, fixtures of official panels and glossy diversity awards ceremonies.

“They are not just supporting transition, they are promoting it,” said Moore. “They have created a market for it.”

In Brighton, an LGBT charity called Allsorts Youth Project has launched the UK’s first group for “trans or gender-questioning” children aged 5 to 11. As of March, according to Allsorts documents, it had 27 local members with an average age of nine. “Trans adults facilitate the space in order to give children positive role models,” the documents say. The charity’s Facebook profile picture states: “Allsorts means family.”

For any parent concerned that five is young for children to question their gender, Allsorts says: “Extensive studies of older transsexual people show that 80% knew something was not right before the age of 12. The most common age is 7.” The “extensive studies” are not cited and Allsorts did not return calls.

Allsorts, which received £166,000 in public and lottery funding last year, also has a group for children aged 11 to 15 with 76 members (some not trans) and an average age of 14. It runs awareness sessions for children, and training for staff, in nearly all Brighton’s state secondary schools, Dorothy Stringer included, as well as five primaries. It wrote the “trans inclusion schools toolkit” that schools use to determine their policies.

The latest edition, released last month, says sex-education teachers must tell children that “most rather than all boys have a penis” and “most rather than all girls have a vagina”. It says parents who question their child’s wish to transition can be referred to Allsorts support groups, or even reported to social services. Moore says she knows of one family, not in Brighton, where a 15-year-old girl was taken into care after her parents resisted her wish to be a boy.

In Cambridge, leaflets promoting a new “trans and gender-variant under-12s group” have started to appear in local primary schools. It is run by the Kite Trust, which has just received £193,000 from the government for its schools work. The contact on its leaflets, an LGBT activist called Lily Quantock, describes herself on her Twitter profile as a “moulder of young minds”.

There is much more moulding online. In thousands of Instagram posts, Tumblr messages and YouTube “vlogs”, impressionable young people, largely girls, are told by upbeat, pretty folk slightly older than themselves how transitioning can be an escape route from uncertainty, autism, friendlessness, abuse, the pains of puberty, or homosexuality. Being a young lesbian is less cool.

“When my daughter was 14 she came out as gay. At 15, she said, ‘I’m a boy, I’m transgender,’ ” said one mother, Lily. “She and her sister were watching endless YouTube videos. She got onto this ‘my transition’ timeline . . . she was spending all her time online. I looked too and I found websites where middle-aged men were telling you what you should say to your doctor to get hormones.”

On YouTube, testosterone is revered as “T”, “vitamin T” or “man-juice”. The side-effects are rarely mentioned. Vloggers urge you to “just do it . . . it’s all good”. There are tips for handling parents, claims that transition “saved me” from suicide and warnings that if you do not act quickly, you too could die.

After nine months, Lily’s daughter desisted, but only after her mother took away her phone. “Getting away from the whole thing of looking at your navel that is the online world was crucial. But it was hard for her to step back because she had thousands of Instagram followers and she was one of the cool trans kids.”

Trans groups reinforce some of the YouTube narratives. Mermaids’ chief executive, Susie Green, routinely invokes suicide to urge more and earlier medical intervention. In evidence to a Commons committee, she claimed that clients of the NHS service that treats gender-dysphoric youngsters have a “48% suicide attempt risk”. The service itself puts the figure at less than 1%.

Michael Biggs, a sociologist at Oxford University, said he knew of no scientifically rigorous study of suicide among trans young people in the UK. The statistics cited by Green come from LGBT advocacy groups using two self-selected samples, one of 594 young trans people, the other of 27. Responding on Twitter to an NHS psychiatrist who accused her of “making stuff up”, Green wrote: “You need to f*** off. You know nothing.”

A disproportionate number of young people seeking treatment have autistic spectrum disorder (ASD). For them, another trans charity, Gires, goes further even than the vloggers, claiming that “anecdotally . . . the symptoms [of ASD] have [often] disappeared once the [gender] dysphoria has been treated”.

In Brighton and other places, a combination of the web, trans activism, awareness classes at school and the pressures of adolescence may have helped produce a condition that an American academic, Lisa Littman, calls “rapid onset gender dysphoria” (ROGD).

The theory is that clusters of teenage friends suddenly express a wish to transition they haven’t experienced earlier in life, “initiated and maintained by social and peer contagion” as a way of coping with symptoms of different, underlying issues, whether autism or psychiatric or emotional pain, she writes in a paper in the journal Plos One.

In Britain, one parent said her daughter had expressed a wish to transition at the same time as two other children in her class, but the school “hadn’t seemed to clock that anything was wrong”.

Trans activists fiercely dispute the existence of ROGD and the research base for it remains extremely limited. Polly Carmichael, director of the NHS gender service for youngsters, has said that “without a doubt there are some young people who are finding a community, friends and all sorts of things through joining a group who have an interest around gender. It’s probably the case that [some] are caught up in something rather than it being an expression of something that has arisen from within.”

Intriguingly, in every year for the past five, the NHS area covering Surrey, Kent and Sussex, which includes Brighton, has sent more children to Carmichael’s service than the whole of Greater London — although it has half the population.

Professionals are under pressure. A Brighton teacher said: “What’s happening is worrying and many of us know it, but nobody wants to speak up and get shot.” The NHS gender service is caught between the demands of groups such as Mermaids, which want children given cross-sex hormones before they turn 16, and women’s campaigners, who accuse it of already bending too far to activists.

NHS England has signed an agreement, influenced by trans activists, never to “suppress an individual’s expression of . . . gender identity”. This still allows a range of treatments, but Richard Byng, a GP and professor in primary care research at Plymouth University, warned of the “potential harm of overdiagnosis and overtreatment” and said that “medical practitioners should follow a framework of evidence, not simply respond to client expectations”.

“People are embarking on medical transitions they may not need or want in the end,” said Jane Galloway. “I fear greatly that in 10 to 15 years’ time, we will find ourselves with a slew of young adults with mutilated bodies, no sexual function, who will turn round to the NHS and ask, ‘Why did you let us do this?’