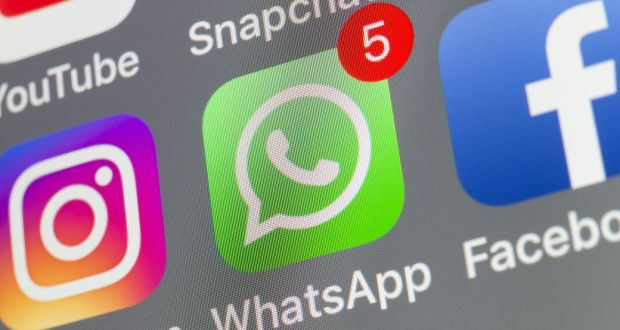 We need to talk about Mam and Dad and their inappropriate and dangerous use of phones. Or, as they call them, mobile phones. They need to get their fingers out and dial it down a little. Honestly, there is a need for urgent legislation, regulation and maybe even a ban on the over 35s using handheld smart devices. It’s getting completely out of hand.

Even my mother has started using emojis and, I don’t think she’d mind me saying, it’s far from smiley-face emojis she was reared.

But it’s the parents of small children who I’m really taking a swipe at.

In fairness, I do use the groups to work out where I’m meant to be at a particular time, on a particular day of the week. And in between the emojis are some nuggets of genuinely useful information, like little shards of gold sifted from a tray of dirt in a Godforsaken stream on a remote mountain top.

But the WhatsApp groups run by parents for parents of your kids’ classmates have little to save them. In the absence of any regular need for discussions around logistics, these groups can descend into such discussions as those about “serious incidents” at the school that generally turn out to be anything but serious and mostly not even incidents at all.

Like the time an alert went around in our area that a suspicious man in a black car was approaching kids at school bus stops. Turns out he was the bus driver driving around to tell the kids the bus had been cancelled in the snow and that they should go home again. Well done parents.

What we are talking about, here, is people who probably have time on their hands stealing valuable screen minutes and even real-life minutes from the busy amongst us with inane and sometimes vacuous and unnecessary group messages with no obvious purpose.

With this assertion I am probably offending people, I know, I know. And it’s like the Late Late Show – if you think it’s so twee and parochial just switch over to Graham Norton. But you see, I’m there just in case something important crops up.You do not want to miss Uncle Gaybo interviewing Gerry Adams or Sinéad O’Connor or that Pee Flynn moment. But, it’s not easy. You have to sit through hours of people hawking books, minor celebrities and crap furniture restoration first. Try it some time.

I remember the joy of my mobile phone ringing when I first got one in 1998. One of the first calls was from Paul Gillespie of The Irish Times. I had left work for the day but he had a question about our online coverage of the Amsterdam Treaty referendum that year. Not exactly Buzzfeed, but the excitement of being contacted by a colleague after leaving work and speaking as I walked around without a long wire trailing behind me was something to behold. Like, I could literally walk where I wanted to and continue to talk. I did 10 circuits of that apartment. Crème de la Menthe (as Del Boy would say).

These days, the joy is gone and I often stand accused by those who live in close proximity to me of being “always on your phone”. Guilty as charged, your worship. “If I was holding a book or a physical copy of the New York Times would I stand accused of such heinous crimes as not paying enough attention to certain people?” I plead from behind my Facebook feed or work email. And if I wasn’t stuck in my phone for every waking moment, who would send those thumbs up and crying laughing emojis to everyone we know?

by Patrick Logue, The Irish Times