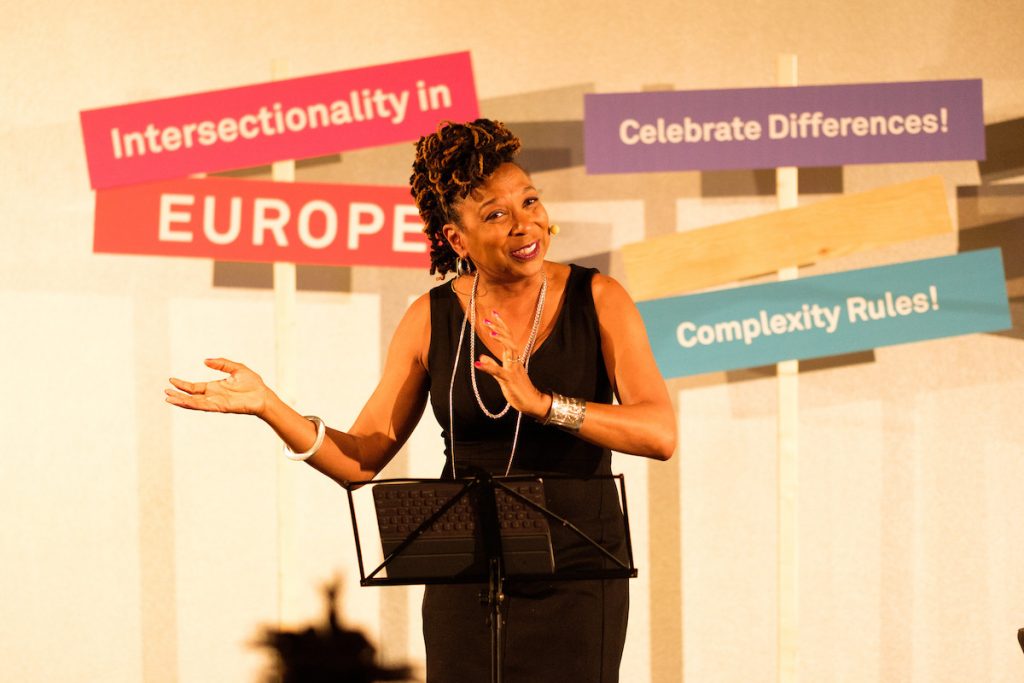 Inspired by the fallout from a recent Twitter thread posted by Sarah Haider, I’d like to offer some passing thoughts on intersectionality. Originally conceived by Kimberlé Crenshaw as a way of highlighting bias against black women that did not fit neatly into the category of either racism or sexism, intersectionality has since expanded to include oppression based on class, LGBTQ, disability status, and so forth. The basic idea is that when two or more dimensions of oppression coincide in the same person (say, a black woman), she not only faces “double-discrimination” (racism and sexism), but she may also face a third kind of discrimination which is not reducible to the other two. Put simply, oppression is more than the sum of its parts.

Crenshaw’s original intent was narrow. She did not mean for intersectionality to become an all-encompassing thought system with its own epistemology, politics, aesthetics, and more. Indeed she has distanced herself from some of intersectionality’s modern purveyors, criticizing those who see it as a “grand theory of everything.” Nevertheless, that is exactly what it has become. The main problem with intersectionality is that it’s an armchair philosophy. Its purveyors do not look at the social world, gather evidence about it, and formulate theories based on what they see. Instead, they pontificate about the world from a distance.

Intersectionality is the ultimate betrayal of women’s rights.

IF your feminism is intersectional, it is certainly bullshit.

As a result, intersectionality does not describe the real world very well. It’s not clear, for example, that black women are worse off than black men. Yes, black women are far more likely to suffer domestic violence and rape (two issues that Crenshaw highlighted in her original 1989 paper). But black men are far more likely to suffer incarceration, murder, and suicide. Moreover, black women have closed the social mobility gap with white women, while black men still lag far behind their white counterparts. Going further back in history, it was overwhelmingly black men, rather than women, who were lynched by white mobs in the Jim Crow era.

My point is not that black men are worse off than black women; my point is that the question is hard to answer. Different forms of suffering cannot easily be quantified and compared. Rather than attempt what would be a difficult but interesting comparison, intersectionalists simply assert a priori that black men only suffer from one kind of oppression whereas black women suffer from three. This oversimplified, algebraic approach to prejudice ignores most of what happens in the real world.

Intersectionality also presupposes that people of color have unified interests, because they are all similarly oppressed by “white supremacy.” Since Hispanics, blacks, and Asians all suffer from white supremacy, the thinking goes, they’re united in opposition to the interests of whites. But consider immigration—anti-immigration measures have been popular among blacks and whites, but not among Hispanics. As the political scientist Eric Kaufmann observes in his book Whiteshift, in 1986 two-thirds of blacks in California voted “yes” on Proposition 63, which made English the official language of the state. Less than a decade later, a majority of both blacks and whites voted to deny public benefits to illegal immigrants under Proposition 187. In short, contrary to what intersectionality predicts, blacks have tended to align more with whites than with Hispanics on one of the most important political issues of our time.

Or consider affirmative action, which benefits blacks and Hispanics but disadvantages whites and Asians. Because Asians are included in the umbrella term “people of color,” intersectionality indicates that their interests ought to be aligned with blacks and Hispanics. But reality is more complicated, as evidenced by the affirmative action lawsuit filed against Harvard by a group of Asian students (with support from conservative whites).

As Haider argued in her thread, intersectionality’s intellectual flaws translate into moral shortcomings. Importantly, it is blind to forms of harm that occur within identity groups. For a black woman facing discrimination from a white man, intersectionality is great. But a gay woman sexually assaulted by another gay woman, or a black boy teased by another black boy for “acting white,” or a Muslim girl whose mother has forced her to wear the hijab will find that intersectionality has no space for their experiences. It certainly does not recognize instances in which the arrow of harm runs in the “wrong” direction—a black man committing an anti-Semitic hate crime, for instance. The more popular intersectionality becomes, the less we should expect to hear these sorts of issues discussed in public.

Perhaps the most pernicious consequence of intersectionality, however, is its effect on the culture of elite college campuses. Some claims about “campuses-gone-crazy” are surely overblown. For instance, judging from my experience at Columbia, nobody believes there are 63 genders, and hardly anyone loves Soviet-style communism. (That said, the few communists on campus tend to despise intersectionality with an unusual passion.) But one thing is certainly not exaggerated: intersectionality dominates the day-to-day culture. It operates as a master formula by which social status is doled out. Being black and queer is better than just being black or queer, being Muslim and gender non-binary is better than being either one on its own, and so forth. By “better,” I mean that people are more excited to meet you, you’re spoken of more highly behind your back, and your friends enjoy an elevated social status for being associated with you.

In this way, intersectionality creates a perverse social incentive structure. If you’re cis, straight, and white, you start at the bottom of the social hierarchy—especially if you’re a man, but also if you’re a woman. For such students, there is a strong incentive to create an identity that will help them attain a modicum of status. Some do this by becoming gender non-binary; others do it by experimenting with their sexuality under the catch-all label “queer.” In part, this is healthy college-aged exploration—finding oneself, as it were. But much of it amounts to needless confusion and pain imposed on hapless young people by the bizarre tenets of a new faith.

Nevertheless, intersectionality is preferable to what exists in much of the world. For example, in parts of the Middle East, South Asia, Africa, Eastern Europe, rural America, and many other places, gay people face immense amounts of pressure to pretend that they’re straight. That’s a much larger problem, comparatively speaking, than what’s happening on elite campuses. At the same time, elite campus culture is overcorrecting for more traditional forms of identity-based oppression by giving cis-straight-white students—or at least those among them who are embedded in the intersectionalist subculture—a choice between being honest with themselves and being held in high esteem by their peers. Ultimately, we should want to create a culture that does not provide strong incentives for people to be anything other than who and what they are.

It is this last observation that leads me to believe that Kimberlé Crenshaw’s impact as an intellectual is vastly understated. She may not have intended to, but she created an ideology that birthed a large and influential American subculture. Several intellectuals can boast of having had an impact on the culture of intellectual-types—the kind of people who voluntarily read long essays in Quillette or the Atlantic. But very few intellectuals—not Ta-Nehisi Coates nor Jordan Peterson nor Peter Thiel—can claim to have created a unique subculture that has engulfed substantial numbers of “normal” people.

Coleman Hughes is a Quillette columnist and an undergraduate philosophy major at Columbia University. His writing has also appeared in the New York Times, Wall Street Journal, Spectator, City Journal, and the Heterodox Academy blog. You can follow him on Twitter @coldxman