Election 2020: Everything you need to know before tomorrow

Why is it on a Saturday? Who is promising what? What are the polls saying? 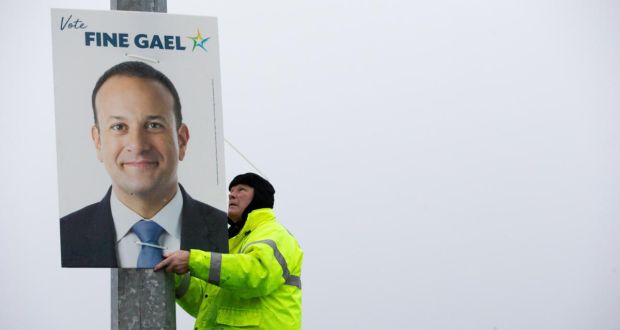 When is the general election happening?

The general election is taking place on Saturday February 8th, after the current Dáil, the 32nd Dáil, was dissolved on January 14th. The new Dáil will meet for the first time on Thursday, February 20th.

Why is there an election on a Saturday?

A Saturday polling day is unusual with all elections in recent decades taking place on a Thursday or Friday. However, Ireland’s historic 1918 election was held on a Saturday in December while the Nice Referendum and Children’s Referendum were also held on Saturdays.

The Taoiseach said he decided to hold the election on a Saturday to make voting easier for families with children. “I do so knowing the inconvenience to families of a polling day on a weekday during school term – time off work, lost income, increased childcare costs,” he said. “I also want to make it easier for students and those working away from home to cast their votes.”

Polls will open at 7am on Saturday and close at 10pm. Counting will commence on Sunday in all 39 constituencies.

Wait, February 8th sounds familiar. Is something else on that day?

Good point. Ireland play Wales at the Aviva Stadium in rugby’s Six Nations Championship on the 8th while the Dublin-Monaghan national football league match is also scheduled to take place in Croke Park.

Voting in the five-seat constituency will go ahead on Saturday after Minister for Local Government Eoghan Murphy signed a “special difficulty” order to allow ballot to proceed. Returning officer James Seymour had postponed the vote following the death of Independent candidate Marese Skehan on February 3rd. However, following legal consulation and advice from the Attorney General the vote will take place on February 8th.

Who is in charge until the new Dáil sits?

Varadkar will remain Taoiseach and Simon Coveney Tánaiste, and all other Ministers will stay on until the new Dáil is formed. TDs, however, are no longer TDs.

Am I eligible to vote and if not, can I still register?

Anyone in doubt should visit checktheregister.ie to see if their details are included on the 2019-2020 electoral register. If you’re not listed you should contact your local authority.

The deadline to register as a voter in this election was Wednesday, January 22nd. The February 8th election date meant that thousands of people who registered to vote since last May’s European and local elections would not be eligible as the register of electors is not updated until February 15th, as stipulated in the Electoral Act 1992.

The only way of registering before that was to get your name added to the supplementary register.

How many TDs will be elected?

A total of 160 representatives will be returned to the 33rd Dáil up from 158 in the outgoing assembly. When it comes to counting the numbers, the effective seat number is 159 because the Ceann Comhairle, the speaker in the Dáil, is automatically re-elected. That is Seán Ó Fearghaíl of Fianna Fáil who represents Kildare South. In most situations he does not vote. Therefore, a government will need 80 TDs to hold a majority, something that will almost certainly require a coalition. You can try to form your own government using our coalition builder tool currently based on political correspondent Harry McGee’s predictions. The coalition builder will be updated with the real seat numbers (if required!) after counting is finished next week.

Irish elections use a single-transferable-vote system which means you vote in order of preference. As a result it pays to express a preference beyond your number one vote as Patrick Smyth explains in this piece from 2016. And Stephen Collins has also written a piece on how the system works and how you can use it.

What is the current lie of the land?

Fine Gael were the largest party in the outgoing Dáil and led a minority government with the support of Independents through a confidence-and-supply agreement with Fianna Fáil, whose members abstained on key votes.

When the Dáil was dissolved the parties had the following number of TDs:

*There is a vacant seat in Cork North-Central following the resignation of former Fine Gael TD Dara Murphy in December.

What are the different political parties promising me?

Fine Gael has moved on from their 2016 slogan of “let’s keep the recovery going” to “a future to look forward to” while Fianna Fáil is sticking with its 2016 slogan of “An Ireland for All”. The decision to reuse these words is because “it’s not a slogan, it is a philosophy, it is a viewpoint,” said Fianna Fáil leader Micheál Martin. “We want to bring people in from the cold.”

Fianna Fáil leader Micheál Martin, whose party is running with the slogan ‘an Ireland for all’. File photograph: Dara Mac Dónaill

Green Party leader Eamon Ryan said Ireland needed to change “the entire transport system, the entire food system, the entire energy system and the entire waste system” to protect future generations, adding that these changes would take “at least a decade”. “This election is about the decade ahead, not just the next four or five years,” he said.

Labour Party leader Brendan Howlin said his party was “not a debating society” but was focused on getting problems fixed and committed to building 80,000 social and affordable homes if Labour makes it into a government coalition. Senator Ivana Bacik, director of elections for the party, said the campaign would focus on “real solutions including five non-negotiable proposals on housing, health, work, children and climate”.

Sinn Féin leader Mary Lou McDonald said the party would deliver the “largest” programme of public housing building in the history of the State if elected to government, adding the message that “the housing crisis can be sorted”. Sinn Féin has said it will also introduce a three-year rent freeze.

People Before Profit tweeted that people should “vote to break the cycle of Fine Gael and Fianna Fáil” and called on the public to “vote for our future” and “take it back from the landlord parties”.

The Social Democrats described the upcoming election as “a chance for people to change the direction Ireland is going on” and called on people “who hope for better to vote for better”. “At the core of social democracy is putting people first,” said the party. “Not vested interests, not golden circles, but the common good.”

The party manifestos can be accessed here:

When were the leaders’ debates?

The first head-to-head debate between Varadkar and Martin was on Virgin Media One. Claire Byrne chaired a debate between the leaders of seven parties on RTÉ on Monday, January 27th. Virgin hosted another seven-way debate chaired by Matt Cooper and Ivan Yates on Thursday, January 30th, while RTÉ held a Prime Time debate between Varadkar, Martin and McDonald on February 4th. The programme was initially only going to feature the Fine Gael and Fianna Fáil leaders but amid growing momentum in the Sinn Féin campaign, the broadcaster invited McDonald on.

What are the polls saying?

The latest Irish Times/Ipsos MRBI poll, published on Februrary 3rd, had Sinn Féin as the best supported party on 25 per cent. Fianna Fáil were second on 23 per cent with Fine Gael falling to 20 per cent. It was the first time Sinn Féin has emerged as the biggest party in the history of the poll series. The Greens were on 8 per cent, Labour on 4 per cent with Independents/others on 20 per cent, when undecided voters were excluded.

The first Irish Times/Ipsos MRBI poll published on Monday, January 20th put Fianna Fáil in the lead on 25 per cent, Fine Gael in second on 23 per cent and Sinn Féin a close third on 21 per cent.

A Sunday Times/Behaviour and Attitudes poll published the previous Sunday had Fianna Fáil on 32 per cent with a 12-point lead over Fine Gael.

A Business Post/Red C Poll on published on February 2nd put Fianna Fáil and Sinn Féin level on 24 per cent with Fine Gael third on 21 per cent.

Profiles of each of the 39 constituencies can be found at irishtimes.com/election2020.

An Ipsos MRBI exit poll commissioned jointly by The Irish Times, RTÉ, TG4 and UCD will be published as soon as voting ends on Saturday.

The Irish Times will have reporters at all the count centres and will report on each of the 39 constituencies on irishtimes.com and our live blog will cover proceedings across the country.