UK politics is getting more dramatic, divisive and nastier. Nowhere is this more evident than in the populist turn taken by the Conservative Party. Problematically for them, however, populism is incompatible with some of the central principles of British conservatism. So while playing to the gallery might win votes in the immediate term, the Conservative Party could be managing the fallout for decades to come.

Among the core features that distinguish conservatism and populism are their different approaches to the rule of law and their conception of “the people”. The law is not something pivotal to populists, and part of their shtick is to at least appear to flaunt it, whereas conservatives bestow reverence upon it.

The collision course between conservatism and right-wing populism, set in motion by Boris Johnson, is nowhere more apparent than in the Supreme Court’s ruling that the government’s prorogation of parliament was “unlawful”. One of conservatism’s key principles is respect for tradition. Wrapped up in this is the tradition of the rule of law. For more than 300 years, the Conservatives have claimed to represent law and order. This ruling shot that to bits.

The Supreme Court’s decision is not a usual judgment on an executive. To the contrary, it is so unusual that the epithet “historic” has been applied to it. As yet, constitutional historians and parliamentary experts have failed to provide a parallel case to which it can be compared. It appears entirely unprecedented. 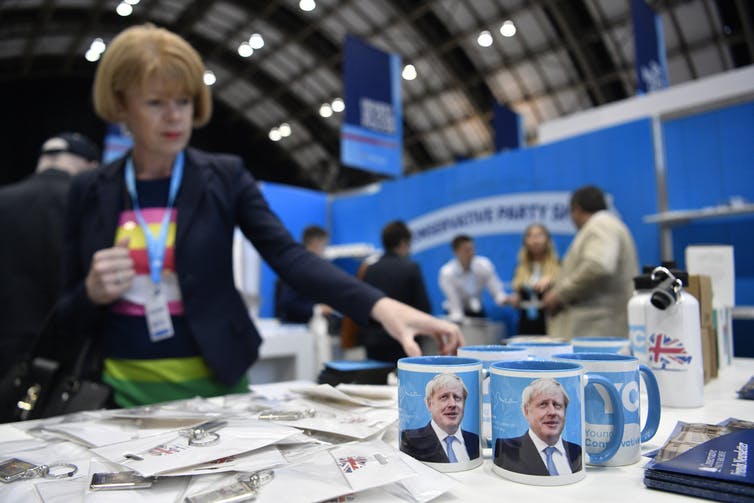 A delegate eyes up merchandise at the Conservative Party Conference. EPA

The government might achieve a short-term bounce by claiming elitist judges are trying to block Brexit, but the longer-term consequences are stark. No longer will the Conservatives be able to claim that they are the natural party of the law. They will face an immediate and emphatic riposte: you broke the law.

Opposition parties will repeat this accusation over decades. Think of how the Conservatives respond to any question about fiscal matters or public spending. “We’re clearing up Labour’s mess,” they say. “Labour crashed the economy, and we’re putting the house in order.” These, and similar phrases, have been uttered again and again for over a decade. Conservatives will now be subject to the accusation that their privilege and entitlement knows no bounds. These are people who will break the law to get what they want.

Many Conservative politicians (I hesitate to use the phrase MPs, because so many have either quit or had the whip withdrawn) saw that the high-risk strategies associated with Johnson’s top adviser Dominic Cummings would stretch conservatism’s steady-as-she-goes credentials to breaking point. Quite apart from their differences with the executive over Brexit, former Conservative MPs Anna Soubry, Dominic Grieve, Phillip Lee, Amber Rudd and others, were well aware that the party’s deep and carefully honed presentation as the party of respectability, normality and legality was in peril as the impatience – the push to “just get on with it” – took over. Their instincts have been confirmed by the Supreme Court.

Attention now turns to what happens next. We’ve been given an inkling of this already by leader of the house Jacob Rees-Mogg’s reported characterisation of the ruling as “a constitutional coup”, and Johnson’s return performance in the Commons suggests more of the same.

Cummings reportedly believes the Supreme Court ruling is beneficial as it will enable the government to reinforce and deepen the populist approach of pitting the people against the establishment.

Dominic Cummings, the prime minister’s top aide, is thought to be a driving force behind the populist agenda. PA Kirsty O’ Connor

For conservatism, protecting “what is” (in other words, the institutions that have been handed down to us) is a joint project between conservative politicians and the people, their constituents. Together they have been engaged in this project for centuries. This means there is a seamless bond between the people and the elite (or establishment, or government, or parliament, or judiciary), which enables them to rule and the people to view the Conservatives as the natural party of government and their proper representatives.

Populism, in stark contrast, operates by breaking that bond. It decrees that the elite has abandoned the people, and acts against their interests.

Of course, this particular government must adopt the slightly more subtle approach of identifying parliament and the judiciary as the culprits frustrating the people’s will rather than deploying the classic populist antagonism of the “people versus the elite”. It is, after all, an administration led by a man deeply associated with the elite.

As with its current approach to the rule of law, Johnson’s government is jeopardising that long-running and carefully nurtured association. Through breaking that bond and initiating an antagonism between the people and the establishment, “the people” might start to identify a different one. The PM declares that parliament and the judiciary constitutes the establishment but, now this particular can of worms is open, the finger might just as well be redirected towards him and his party.

Rory Stewart, a recent party leadership candidate, has opined that the Conservatives are going through a “passing phase”. The worry for him and the “moderate”, One Nation Tories that have resisted and rejected (or been rejected by) Johnson’s populist turn is that the enduring associations that the Tories have carefully crafted are being permanently ripped apart before our very eyes.

The prime minister’s next big test will be whether to abide by the law and ask for a Brexit extension or ignore it to meet his commitment to taking the UK out of the EU on October 31 with or without a deal. What would happen to him then is anyone’s guess, but further digressions from the law will only reinforce the impression that this government has gone rogue.

Conservatism and right-wing populism are uncomfortable bedfellows. The longer they remain together and the more entrenched the connection becomes, the more obvious this will be.