Academic freedom is at the heart of successful universities. UNESCO defines it as the right “to freedom of teaching and discussion, freedom in carrying out research and disseminating and publishing results”. Academics have pointed out that it also means self-governance and security of academic jobs to ensure independence.

Yet in the current climate, academic freedom is under threat everywhere. Not only do some countries perpetrate direct attacks on students and scholars. But the internationalisation of higher education has also created new global threats for both scholars and students.

The government of Turkey, for example, has attacked, dismissed, and imprisoned its critical academics. And the Hungarian government has undermined university autonomy and attacked certain fields of study. This has forced the Central European University to leave Budapest.

There are also worrying developments in Russia, the Baltic countries and other parts of Europe.

The commercialisation of higher education has also led to more subtle and institutional threats to academic freedom. This has brought with it a worrying trend for universities to compete in a market for students and money – striving to outdo each other in highly problematic “excellence” rankings. The marketisation of higher education has also led to the increase of short-term or zero hours contracts for academics and the erosion of academic autonomy in many countries.

Collaboration and exchange with academic actors in repressive systems – such as China – has also led to new dependencies and vulnerabilities for universities around the world. If engagement is not transparent and subject to ethics guidelines, there is a risk that universities may become complicit with rights violations abroad – and undermine academic freedoms at home. 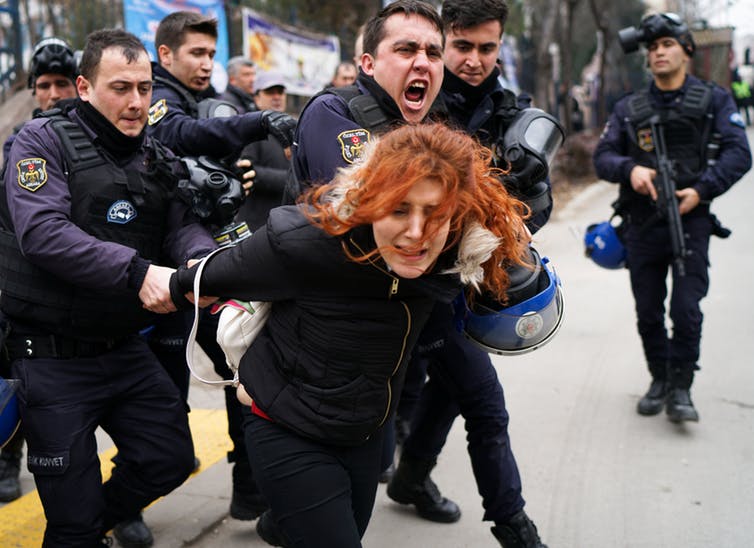 Riot police detain a demonstrator during a protest against the dismissal of academics from universities, outside the Cebeci campus of Ankara University in Ankara, Turkey. Reuters

Debates about what can and cannot be tolerated as part of academic discourse have also at times been derailed. In some cases, extreme right-wing speakers have been invited to engage in hate speech on campuses. The populist right has portrayed criticism of such invitations as attacks on free speech.

In other cases, outraged groups have demanded unacceptable retaliation for merely offensive views. In 2018, for example, university students petitioned for a university professor to be removed for expressing his view that homosexuality was a sin.

Such derailments have blocked genuine discussion of the boundaries of academic freedom and its relationship with free speech. This comes at a time when academic freedom – and ways to defend it – badly need to be addressed. And in the face of larger, political, structural and institutional threats, universities have a responsibility to provide a space for critical discussions and the pursuit of truth.

The complex and interrelated threats to academic freedom can only be solved if scholars, universities, professional associations and potentially international bodies come together. NGOs like Scholars at Risk, which support and defend the principles of academic freedom and human rights of academics around the world, have long called for further action to be taken by institutions and their networks.

To respond to direct attacks, there must be more active solidarity. University bodies such as the European University Association have, for example, spoken up on threats to academic freedom in Turkey. And the Association for Asian Studies recently issued a statement on the extrajudicial detention of Muslims in China’s Xinjiang Uyghur Autonomous Region. But this is not enough.

To tackle commercialisation, universities need to reform funding structures. They also need to stop acting as competitors in a market that bases success on rankings – as this threatens to undermine academic freedom “from within”. To compound this problem, rankings are blind to whether or how well universities protect academic freedom.

Scholars At Risk and the Global Public Policy Institute have proposed mapping academic freedom. And recently, Times Higher Education unveiled a new ranking model based on the UN’s Sustainable Development Goals. This included markers such as gender equality which alter traditional rankings. Such exercises can challenge, if not subvert, current “league tables”. And might also motivate universities to pay more attention to values they profess to uphold.

But more must also be done to raise awareness at universities of what academic freedom means and to encourage students and staff to engage with this central issue. This can be done by integrating and discussing academic freedom in teaching, organising debates on the topic, and deepening knowledge through existing courses.

Universities also need to adopt ethics guidelines for global engagement – drawing on those proposed by Human Rights Watch – and create ethics committees and other mechanisms to implement them. And they must speak out, especially when students and scholars in partner institutions are at risk.

Critical thinking has never been more important than it is today – when the world is facing enormous governance challenges. And to be able to contribute to the solutions of these challenges, universities need to protect academic freedom, both at home and abroad.